Nearly 3 years after its original release, the SK-720 is in for an upgrade! The new Black Edition SK-720 will feature:

Overview
The SK-720 can greatly simplify your heli’s setup,
by eliminating the flybar mechanics, tail gyro,
and with the use of satellite receivers (not included), the receiver core and associated wiring as well.
But more than just a flybarless system, the SK-720 is a complete 6-degree of freedom inertial flight control system.
So what does that mean for you?

Fast Performance
For 3D pilots, the SK-720 integrates the yaw and cyclic gyros,
giving rock-solid piro maneuvers and tail control that benefit from knowing what the collective stick is doing.
Flybarless flight gives you more power with less bogging, and a locked-in control feel that is far superior to traditional flybar flight.

Improved Stability
For beginners or those learning 3D, the SK-720’s built-in 3-axis accelerometer means you can set it to self-level,
like a coaxial heli. This feature can be turned on full time, dialed down as your skills improve,
or set to bail you out at the flick of a switch. Plus, a flybarless heli has greater stability than a heli with a flybar,
and with fewer parts, is easier to repair. Small 450 size helis become as stable as 90-size helis. The SK-720 will allow every new pilot’s first R/C helicopter to be flybarless.

Flight Logging
For all pilots, the SK720’s built-in flight logging and data-plotting tools let you record and play back your flights in a simulator-like display on your PC
(like a black-box recorder). Both the heli’s motion and the stick positions are displayed, letting you learn exactly where you can improve your skills – or why you crashed.
The playback software can also be used as a diagnostic tool, warning you of voltage dropouts and high vibration, while marking where in the flight they occurred.
The data plotting software’s free version lets you analyze your heli’s vibration spectrum to find the source of mechanical issues,
and with a low-cost upgrade, you can also plot and print reports for all the critical health log data for your heli and its radio system.

Helis Big & Small
For pilots flying micro-helis, the SK-720 will greatly simplify and lighten your machine.
It also has a special small-heli tail gyro mode to give good holding power even on 250-size helis.
If you fly larger helis, the SK-720 includes a heavy-duty external power bus that’s good for 25 continuous amps,
and helps to isolate vibration from the gyro itself. The bus allows for high voltage servos, low voltage servos,
or a combination of both, and includes 16 gauge cabling to connect directly to a 2-cell lipo battery.

Easy Setup
The PC setup software has wizards to guide you through setting up your first flybarless heli in just minutes – making it easier to set up an SK-720 machine than a heli with a traditional flybar!
The setup software or optional SK-LCD terminal lets more advanced users fully tune their heli for max performance.
And it’s easy to upgrade the firmware at home so you’ll benefit from any future product improvements with just a click of your mouse.
Future upgrades will include a GPS accessory for more precise xyz positions in the flight logs, as well as abilities entirely new to the hobby.

Easy set up for first-time users
Flybarless stabilization with piro-compensation
Built-in tail gyro, supporting most all tail servos by name in the setup software
Supports use as a 9-channel receiver core when used with 2.4 GHz satellite receivers (two dedicated Sat-RX ports)
Works with Digital or Analog swash servos
Suitable for 120, 135/140, and 90 degree eCCPM, as well as mCCPM swashplates
Works with 2,3,4, or 5 blades, with phase trim adjustable to +-90°
Swash Ring anti-binding algorithm
Internal swash mixing, for accurate control
Supports radios with either 1024 or 2048 servo steps, and 22ms or 11ms frame rates
Can also be used with traditional R/C receivers
Expansion port for future accessories such as GPS
8.5 volt capable
Optional 20 amp external power bus for larger than 50-size and nitro helis (15 grams). Make brownouts a thing of the past!
3-axis accelerometer + 3 gyros, allowing self-leveling
High-power 32 bit processor (for future upgradeability)
Expansion port for GPS or a third sat-receiver
Up to 10 servos (one tail servo, 4 digital swash servos, Throttle, and 4 Aux channels)
Port for a remote indicator LED , which you can mount outside of the canopy
Built in micro-SD card (2 GB flight-data logging)
Built in USB mass storage device - Connect the unit to your computer without having to install drivers
Flight data logs can be played back on your PC with analysis of tuning and heli health
Compatible with the Skookum SK-LCD terminal
Existing SK360 setup files can be easily up-converted for the new unit

The SK 540 is our next-generation flybarless system, ready for any pilots wanting no-frills, rock..

The SK-PB2 is a new version of the SK-720's high-amp servo power bus designed for use with di.. 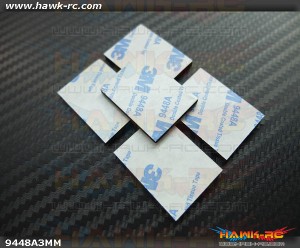